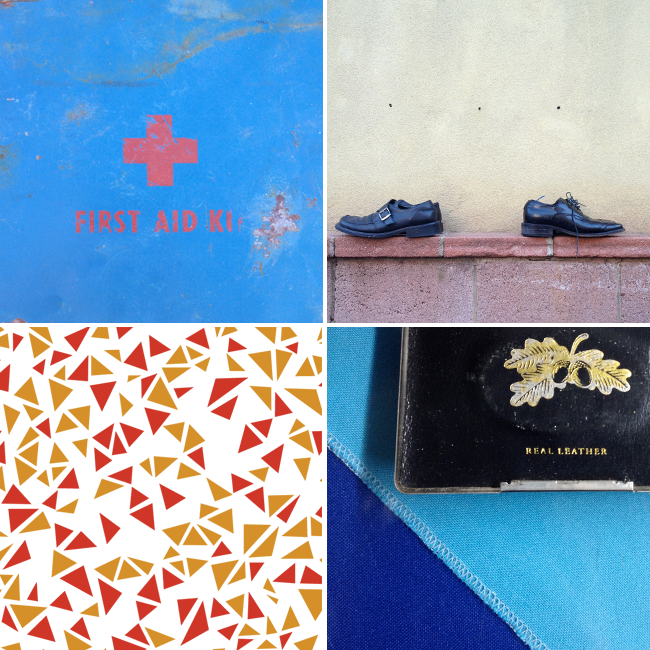 Some iPhone snaps from the last week or so. January is roaring by - I find myself mentally cataloging everything I need to do, making endless to-do lists in my trusty planner. I'm adding them quicker than I can cross them off, but when it's all on paper it feels doable.
clockwise from upper left:
- excellent first aid kit from the long beach flea
- neatly abandoned shoe sets in our parking area
- stamped leather against taqueria tablecloth stitching
- another simple pattern - such a satisfying little habit!
Posted by katie wilson at 4:42 PM 0 comments 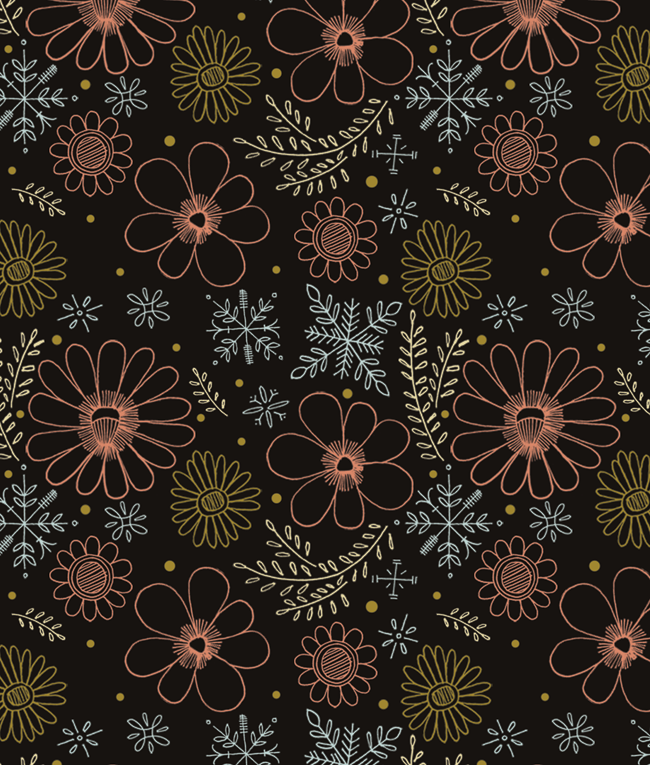 Well, I did it! After much encouragement from Emma - who is seriously drawin' up a storm over in the Midwest - I created my very first pattern! Actually, my first pattern experience was a loooong time ago, when I was still a student at MCAD, but as with most things that I don't use on a regular basis (except, perhaps, my near encyclopedic knowledge of certain television shows, ahem) the memory of how to make patterns escaped my brain.
We started with the prompt "hot and cold", since, as you may know, Minnesota has been unbearably col, and Los Angeles has been reliably beautiful (um, until today/this weekend. But at least it's rainy and 60). After a little sketching and a lot of indecision, I inked up some flowers and snowflakes to put together a loose interpretation of the theme. I used this tutorial, which is very simple. But. It took me much longer than it should have, and it still has that awful easy-to-see-where-the-pattern-square-is effect that I'd prefer to avoid. You have to start somewhere, I suppose, so expect more of these coming your way, internet.
Posted by katie wilson at 4:17 PM 1 comments

Forgive me for doing a birthday post, but since I share January 23rd with Harrison and Scott, it's practically a holiday in these parts (practically? who am I kidding). So, happy birthday to me, and to the two dudes closest to my heart, who I love forever and always. Tonight, we will drink beers and eat waffle fries and video chat with the twin in Colorado, but for now, I'll just leave these little cherubic preschool versions of us here.
Posted by katie wilson at 10:42 AM 3 comments 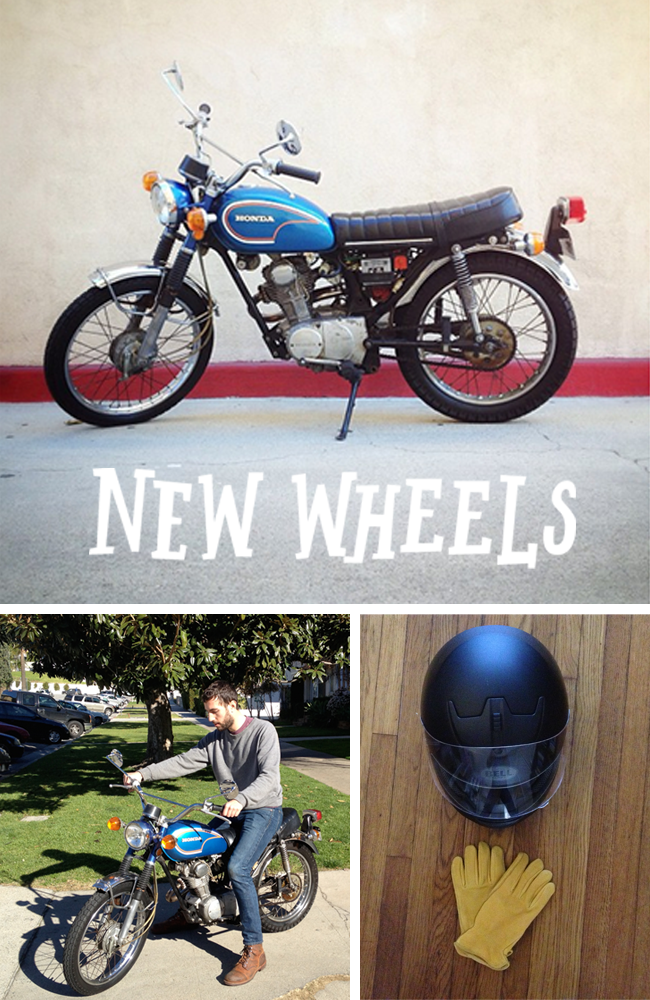 At long last, after many hours of training and tuneups, Scott finally has our new set of wheels: a shiny new-to-us 1972 Honda CL 100 scrambler, restored and shined up with the help of Greg, designer/mechanic extraordinaire. It's a little bike, just big enough for me to fit on the back in a pinch, but a perfect starter motorcycle for us city kids. Scott's excited to swap out his commuting vehicle and zip around town with his mini motorcycle gang, and all I can think about is how easy parking at the beach will be come summertime. In the meantime, I'm experimenting with biker-chic hairstyles for underneath a full face helmet (anything other than long and loose is looking like a no-go). Now I just have to scrape the time together to take the motorcycle safety course so that I can hop on and take it for a ride myself...
Posted by katie wilson at 11:27 AM 1 comments 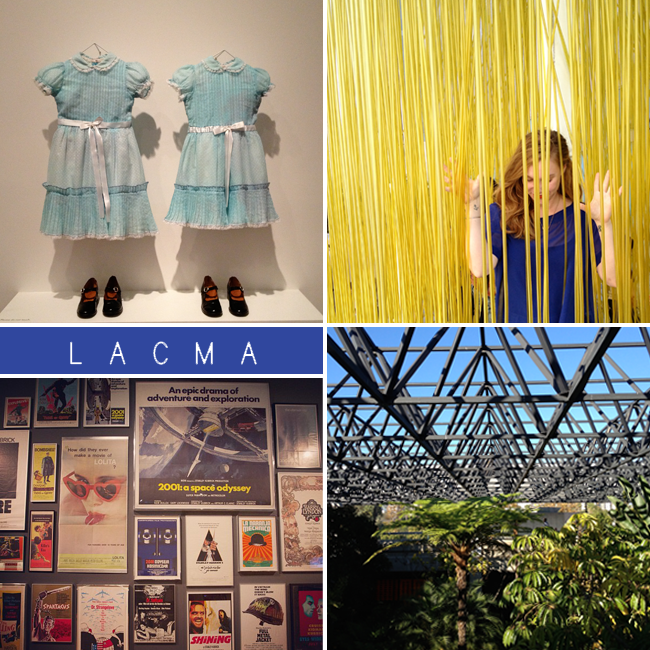 above, clockwise from top left: the twin costumes from The Shining exceeded spooky expectations; I wander through the spaghetti-like tubes of Jesús Rafael Soto's Penetrabile, view from the top at the Page Museum, the poster wall
I'm embarrassed to admit that, despite the fact that we've lived in Los Angeles for quite a while now, Scott and I have not exactly taken advantage of the gallery and museum scene at our fingertips. With the goal of remedying that (and a healthy dose of encouragement from Bree) a few weeks ago we ventured out to LACMA to see the Kubrick exhibition.  It was pretty impressive - full of set dressing, authentic costumes and knickknacks from some truly classic films. I wish I was better about making it my business to see some of these movies (Lolita and Clockwork Orange are near the top of my list), so add that to the resolution list for this year, which is extending at an alarmingly rate. Of course, in addition to the satisfaction of covertly touching the typewriter from The Shining, LACMA is a destination all in its own right. The grounds are beautiful, the tar pits are fascinating and terrifying (of course we went right home to watch Volcano (tagline: You'll have a hell-lava time!..how do I get THAT job)), and I need another afternoon just to wander the collection. Who's in?
Posted by katie wilson at 11:23 AM 1 comments 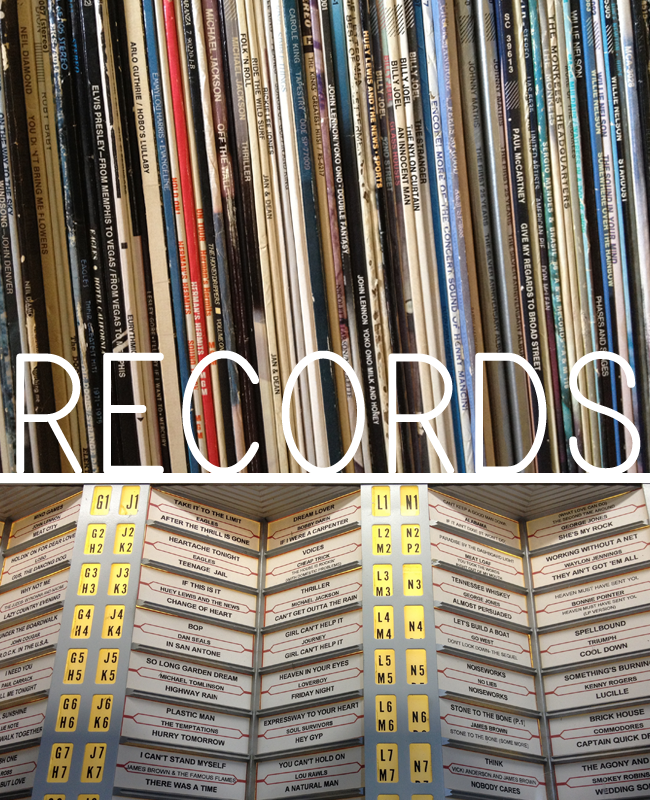 above: a snippet of Mom's collection, one of many jukeboxes that could be mine for a low low price
Christmas was good to us this year, but I think it's safe to say that Scott's favorite gift wasn't wrapped under the tree. During our stay at my parents house, my mom offered up her pristine, extensive record collection to him - anything he wanted was his for the taking. As a card-carrying audiphile, Scott was in heaven, and he ended up dj-ing the majority of our holiday on the turntable, trying out well known and deeper cuts.
And so, with the start of his new collection on the way from Portland and the arrival of a shiny new turntable, we have officially embraced the past, musically (ironic that this comes in the same month that we acquired a Blu-Ray player) and therefore entered the realm of Scavenging for Records at Flea Markets. It's a deep, dark black hole of music geeks and hoarders, a trail littered with jukeboxes and Deadheads and mint condition special edition signed copies. We dipped our toes in on Sunday, in a woefully poor-planned outing to the Pasadena City College Flea (note to self: allot at least four hours for proper digging), but there is surely much more to come. Pray for my naive, musically-uneducated soul.
Posted by katie wilson at 11:17 AM 3 comments 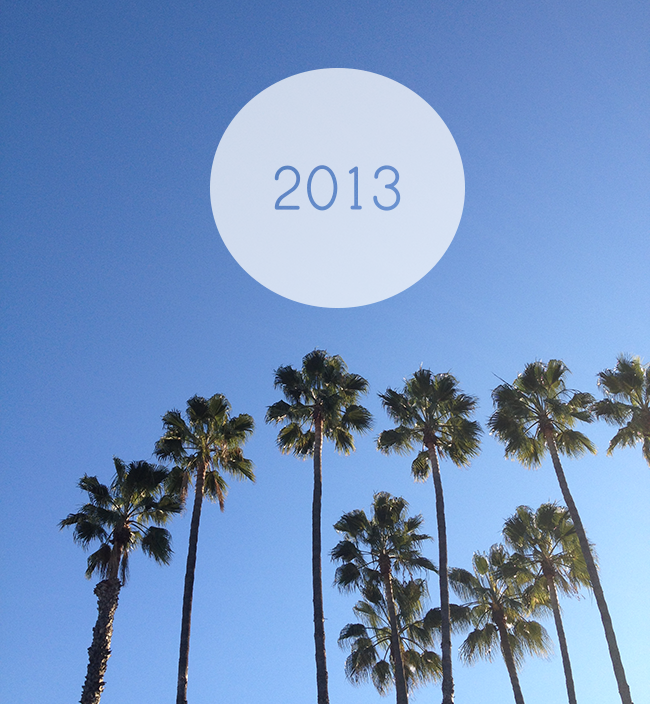 Here we go, lucky number thirteen. It's been a little slow getting started - Tuesday as New Year's Day leaves a bit to be desired. Today has a feeling of the first day of spring for some reason, that itch to get out in the sunshine and make sandwiches for a picnic by the ocean, have a beer on the porch in the late afternoon. It's a good, warm, somewhat lazy feeling that I'm doing my best to meld with some productivity. There are many to-dos to cross off, deadlines approaching, exciting things to begin.
Twelve was eventful, stressful, wonderful...here's to a little more calm, a little more cash, and a healthy dose of love and adventure.
Let's do this thing.