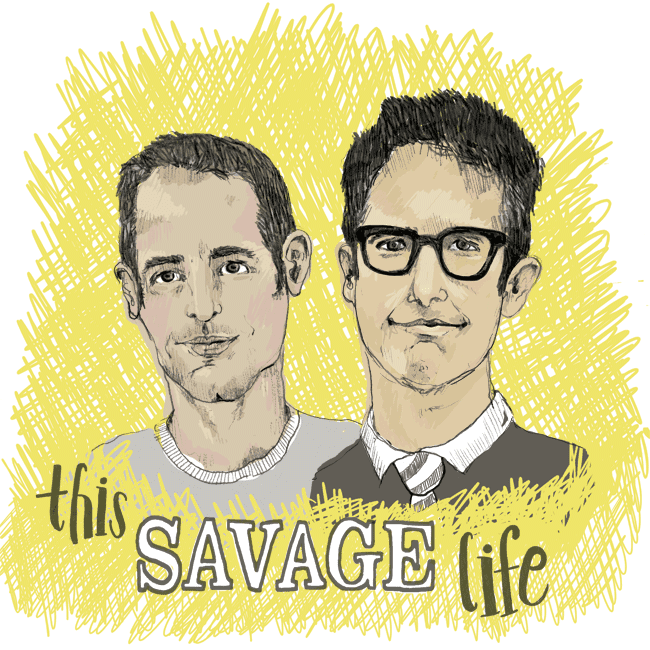 I'm a huge fan of radio and podcasts in general - I listen to them while I draw, while I run, while I cook...it's my grown-up equivalent of reading my comic books as I brushed my teeth (which I may or may not still do as well).
So you can imagine my glee when I downloaded my Savage Lovecast this week and found the guest host was none other than Ira Glass, possibly the only voice I love more than Dan Savage.
You can download the podcast here (episode 276).
And, while you're at it, chase it with this week's This American Life.
I was overwhelmed. And before I knew it, out popped the above illustration. SURPRISE.
In semi-related news, back in the day I had a yoga teacher at the Y that looked and sounded exactly like Dan Savage. This has inextricably linked the two in my head, for better or worse. Downward dog will never be the same.
Posted by katie wilson at 5:19 PM 1 comments

and then we found salvation

Over the weekend, Scott and I drove out to Palm Springs with a few friends.  On Saturday, ready for adventure after a night of fancy drinks and swimming in the darkness, we took a day trip to Salvation Mountain, a Technicolor pile of clay, rock, and hay that is Leonard Knight’s monument to his simple message of “god is love”.


I’d never heard or seen anything about this bizarre desert landmark before, and now it’s all I can think about. To get to Niland, California, we drove on a one-lane highway that ran right by the Salton Sea, and through a handful of tiny towns where people moved in slow motion. The heat and the bright sunlight lit up abandoned houses and skeletons of old bars and hotels, lending a weird, post-apocalyptic feel to the afternoon.

Once we got back within reach of the internet, we watched some video clips of Leonard, who wasn’t at the mountain. After living out of his truck since the seventies, he was recently taken to a nursing care facility. Watching him speak, wide-eyed, about his tribute to his faith was heartbreaking.
My favorite clip of Leonard is from Into the Wild, a 2007 film by Sean Penn. It's just a couple of minutes, but it captures the feeling surrounding this place. See it here.

(all photos by Scott and myself)