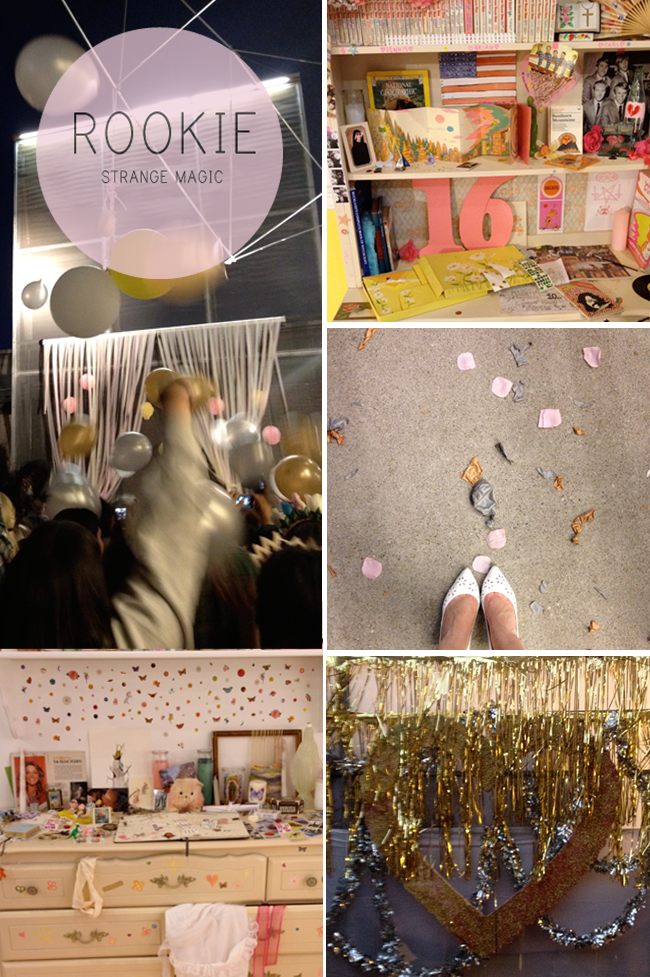 I've always been a fan of Tavi and Rookie Mag - I remember when I discovered Style Rookie (and by "discovered" I mean "Emma alerted me to an internet phenom", as is standard) and spent a good chunk of my time paging through archives of this wunderkind's musings. Anyhow, my girl Kelly is an illustrator and designer for Rookie, and since her and Ben were in LA for a little visit over the weekend, we accompanied her to Prom Night - the closing party for the Strange Magic exhibition at Space 1520.
I went into this event not knowing what to expect, but in retrospect I'm not sure how I could have prepared myself. It was like a My Little Pony factory was invaded by Courtney Love. The work was a real-life version of Tavi's bedroom collections, a mashup of nineties grunge and sparkle, shades of pink and adolescent angst applied with a heavy hand. Likewise, the crowd was, as expected, mostly teen ladies, dolled up in their Tavi-inspired prom wear (read: semi-ironic tiaras and flower crowns paired with platform booties or Docs). They wore dresses like cotton candy, and floated around on their almost-too-high heels like deconstructed fairy princesses, snacking on pixie sticks and crunching over the rose petals, cigarette butts and mini-vodka bottles discarded by the bad girls. When the band started, they became a sea of bodies awkwardly bouncing, tossing aside uncomfortable footwear and lighting ricocheting off surrounding bodies moving to the music, one arm raised, iPhone in hand, to capture a shot of Bleached in action.
It was simultaneously nostalgic and uncomfortable. I remember being that age, dressing up and then spending the night slouched in my carefully selected outfit, but I was a world away from these girls. These girls were the cool kids, pretty girls flirting with punk, secure in a post-Freaks and Geeks landscape where they have become celebrated in the battle against the preppy Normals. And yet, within this crowd where so many on the outskirts came together to form a mass of homogenized originality, there were still the onlookers, coveting the hair, the outfits, or maybe just the confidence of those in the spotlight. We stayed in the middle of the throng, slightly out of place as the clear minority, age wise, and took in all the strange magic.
Posted by katie wilson at 12:08 PM 0 comments 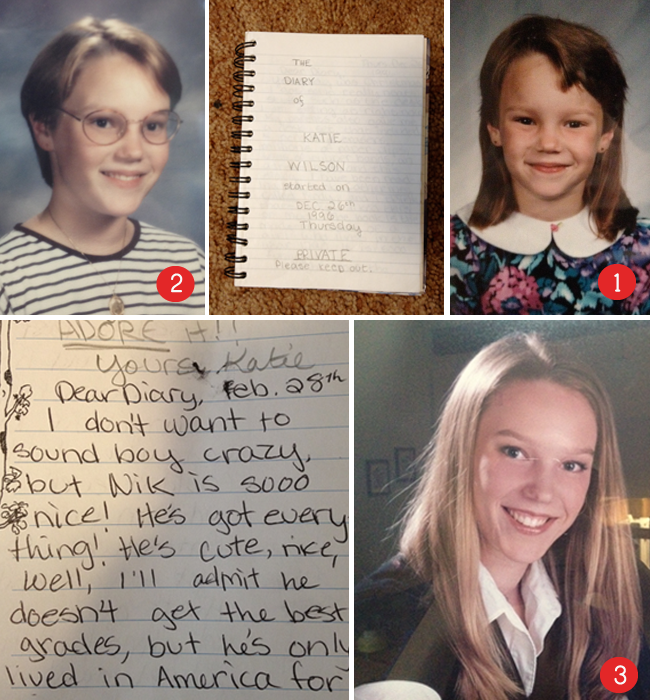 I've always had a thing for revisiting the past. As anyone who knows me well can tell you, I love to return to my favorite books, movies, and albums. They remind me so clearly of specific times in my life, and those personal connections have a way of smoothing over the imperfections of, say, the subtleties of the tragically hip lifestyle in Garden State (which I saw my first month of college, and have watched (and cried through) at every major transition point of my life since), or the childish humor of Barbara Park's Almost Starring Skinnybones (which will never be eclipsed on my best-of-literature list).
This affection for nostalgia definitely comes from my mom - she who saves everything. I realized early on that little treasures stashed in the back of my closet would stay there, awaiting rediscovery on a boring summer afternoon. I'd be lying if I said this last visit to my parent's house was the first time I'd read through the stack of on-again, off-again diaries I kept from age seven to about fifteen. In fact, the cause for picking up a new diary was often reading through the old one. I remember feeling very strongly that I needed to create a new (more eloquent) version of myself for The Future to remember. I was never very disciplined with diary-keeping, but does it really matter? When I did write daily entries, they were just a play-by-play of the day's events. But the random times that my past self decided it was necessary to record some monumental event (mostly having to do with boys, or my ever-shifting Best Friend) the entries are long, excitedly scrawled explanations of episodes that were clearly weighing heavily on my adolescent mind.
And so, last week, I found myself sitting cross-legged on the floor inside my old closet, speed-reading through a tour of my younger self, just as I have so many times before, thinking how funny these entries were, how young I was. I realized that ten years from now, I may very well be clicking through this online diary of sorts, remembering specific events based on the details I decided to highlight here. Cue this film, consider mind blown.

1) age five, kindergarten portrait (pre-diary)
2) age nine / ten? (I probably wrote the pictured entry around when this was taken)
3) senior portrait, age seventeen
Posted by katie wilson at 11:51 AM 1 comments

Happy Monday, internet! I'm diving in headfirst with a heavy dose of website exploration/development (we're gonna do it!), finishing up our newest card release (and by me, I mean John) and a load of beginning-of-the-week shipments. This is pretty much what's running through my head right now: 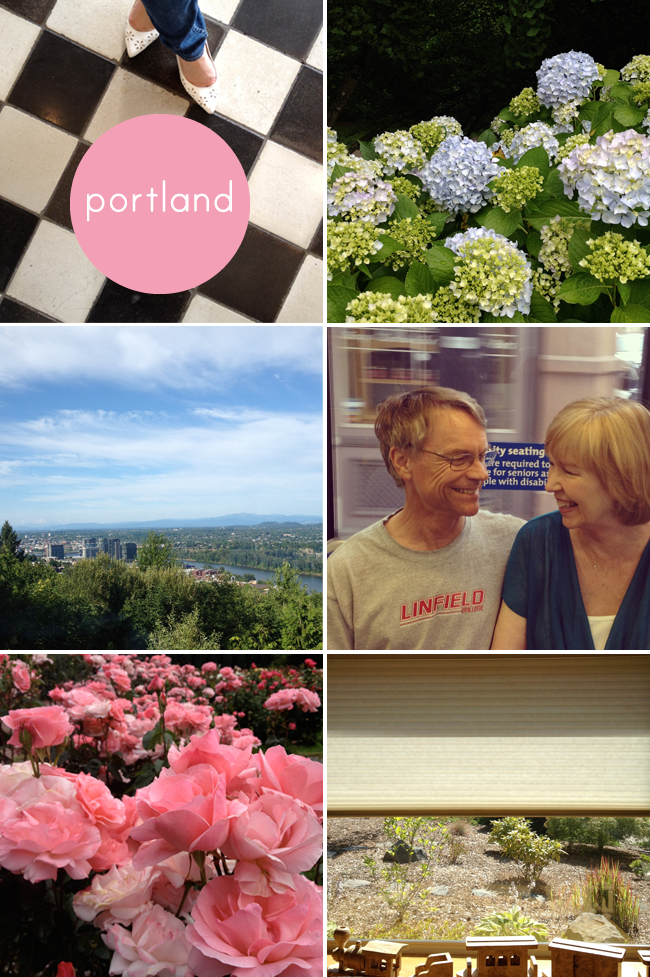 After a week of homemade meals and relaxation, I'm back from my trip up to PDX to visit my lovely parents, pictured above. It was lovely, quiet, and perfect - even the weather held up nicely, despite my previous knack for bringing the rain. I spent a bit of time digging through my old room, and found some treasures to be shared soon, so look forward to a glimpse at past-Katie (yikes).
LA has welcomed me back into its smoggy arms with a couple of 90+ degree days, but I'm prepared. Bring it on, heat, I've got undies in the freezer and a website to build.
Posted by katie wilson at 1:57 PM 0 comments 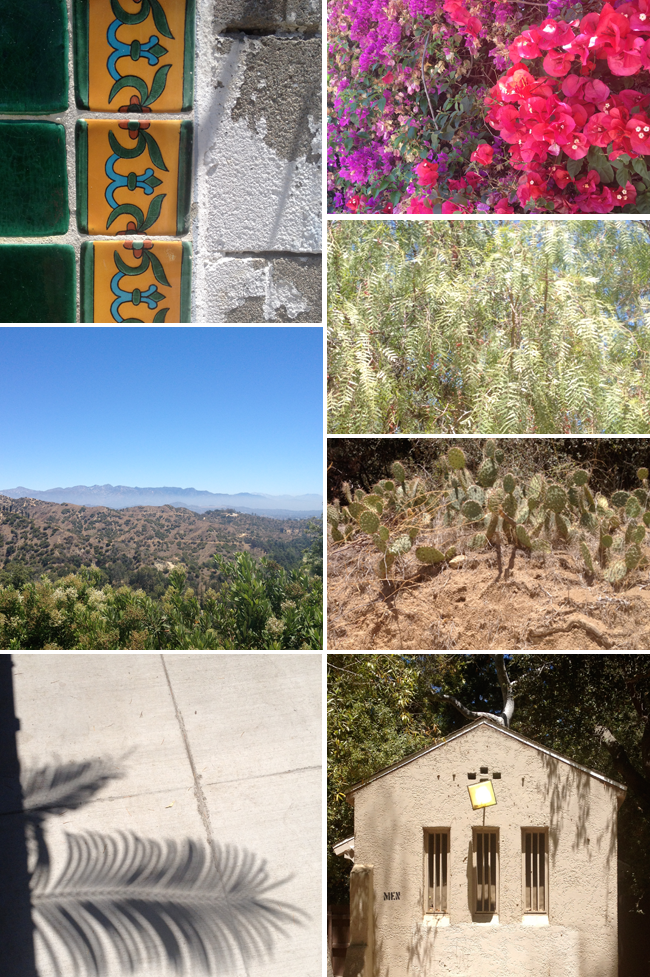 Though my fair city of LA is known best for automobiles, I spend most of my time without a car. I get around town on my trusty bicycle, but I also run daily, and regularly take walks around Los Feliz to absorb the scenery and sunshine (ah, the wonders of working from home). I especially appreciate the weather after my seven year stint in Minneapolis. Los Angeles has so much exotic plantlife snuggled up to the concrete in little nooks within just a few miles of our apartment - I finally took the time to capture a bit of it on film (and by "film" I mean "my iPhone"). 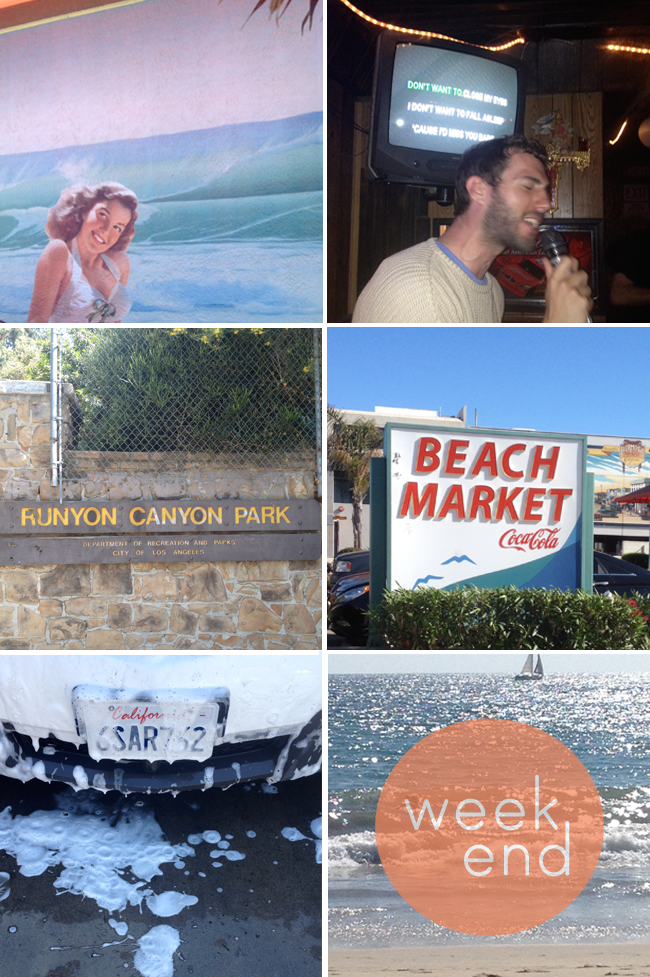 A few months ago, our dear friend Dave left us for the greener, smog-free pastures of Portland. Thankfully, since his work has an office in Los Angeles, he still comes to work/play every once in a while, so last weekend we pretended he never left. We hiked Runyon Canyon, where I learned the true meaning of "off leash area" (read: dog poop) and headed out to the coast for a day of sunning our pale bodies. We also made it out to the Smog Cutter for karaoke, as per usual, and thanks to Dave's photog skills I finally have evidence of Scott's epic Steven Tyler impression. We also managed to get our filthy car washed at one of the many coin op self wash stations in Echo Park. I felt like I was in Grease - watching my guy hose down our car while I tapped around in my heels and drank a diet Coke.
Tomorrow, I head out for a mini vacation to see my family in Portland, where I look forward to lots of home cooked deliciousness, hikes and cycling with my parents, and some old fashioned PDX good times.
Posted by katie wilson at 10:48 AM 2 comments

born on the fourth of july 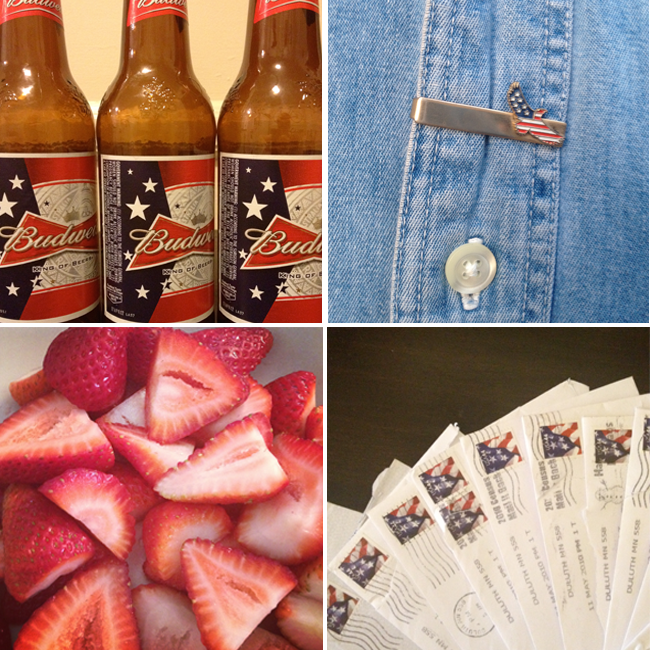 Fourth of July is one of my favorite holidays, and last night was no exception. Scott and I biked over to Echo Park to barbeque with some friends, followed by a dusk hike up an absurd set of stairs to a scenic overlook to watch the fireworks at Dodger Stadium. Despite my choice of red pumps for a night of biking and walking, I had a lovely time. Something about beer, friends, and the smell of fireworks in the night just makes me feel safe and giddily excited.
Though I had my hands full of snacks and beverages for most of the day and evening, I did manage to document a few key sightings of red white and blue, including Jeremy's epic eagle pin, and Scott's burgeoning flag-stamped mail collection (see above).
ALSO: thanks to Sam, I finally experienced the cheese that I first tried last year on the fourth, and now I can buy it and grill it in all its salty, squeaky, chewy glory any time I like. Seriously. Halloumi. It will change you. (and that website is too good not to link to. OOF.)
Posted by katie wilson at 11:22 AM 0 comments 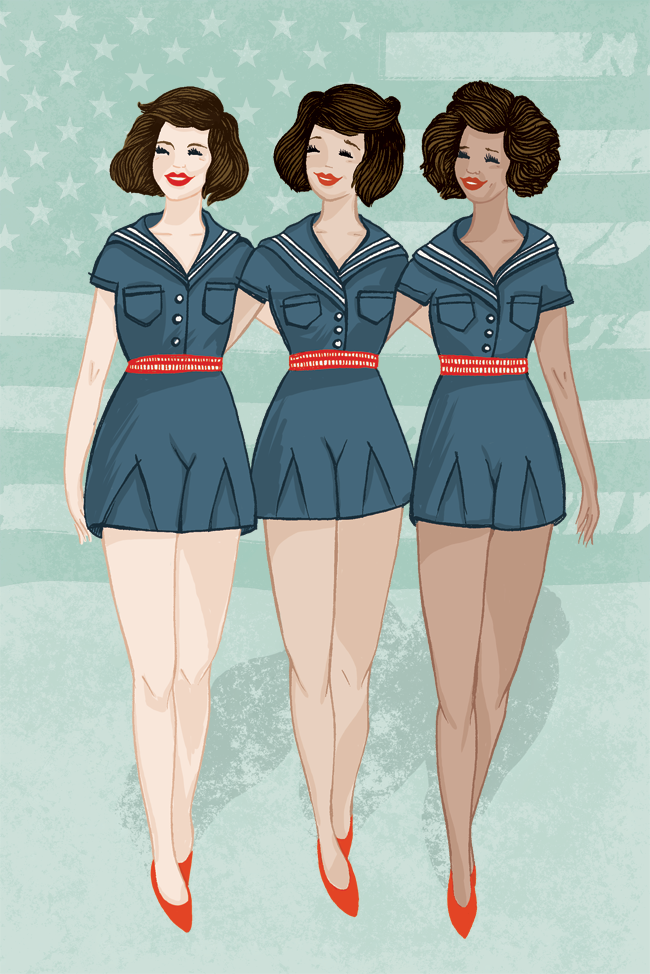 In honor of my fair country's birthday, an illustration of some pretty ladies, in enviable sailor-esque jumpsuits. And now, I am off to drink copious amounts of Budweiser and light some shit up.
Posted by katie wilson at 5:42 PM 0 comments

adventures on the metro 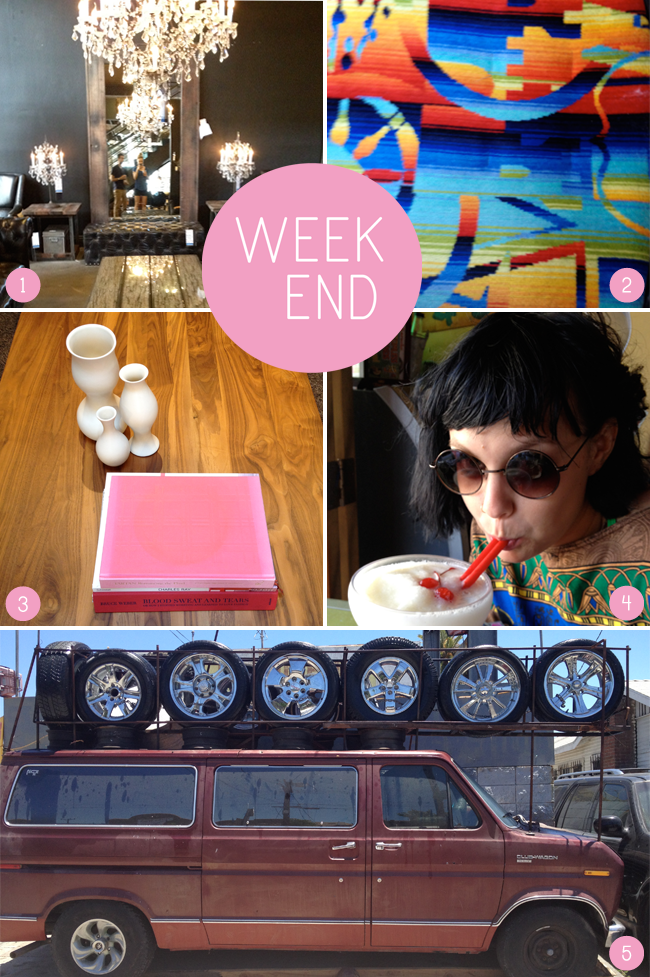 Over the course of a particularly raucous Friday evening at the Drawing Room, Whitney and I hatched a plan to bus out to Santa Monica this weekend for a little beach mall adventure, with Pina Coladas on the brain. And so, Saturday morning found us walking through the mild heat, swimsuit-clad, together navigating LA's famed public transit system with the help of a single iPhone. It was a storied journey, filled with aging bikers possessing an eerie knowledge of Pretty Woman, many admirers of tattoos, frigid air conditioning and surly bus drivers. And of course, by the time we tumbled off the bus, we had only an hour and a half to troll the mall and suck down some frozen beverages before we were due back at the bench, waiting to take the return leg of our two hour ride. By the time we got back to Los Feliz, I was ready to fall into bed for twelve hours (which is exactly what I did, as Scott can tell you). WORTH IT.
Sunday brought furniture shopping in Culver City (we're on a yet-to-be-fruitful mission to find a new couch) and a trip to the Grove to finally see The Avengers - the movie was awesome, the theater was not. Scott and I have officially entered the Arclight Cinema Snob Club. All in all, a lovely couple of days...though I think I've surpassed my quota for the mall-adoring masses for the next month or so.
1) trapped in a sea of opulent luxury at a ridiculous shop
2) bus seatcover patterns were unexpectedly delightful
3) room and board
4) pina colada: earned
5) on the way to the bus stop
Posted by katie wilson at 10:33 AM 1 comments