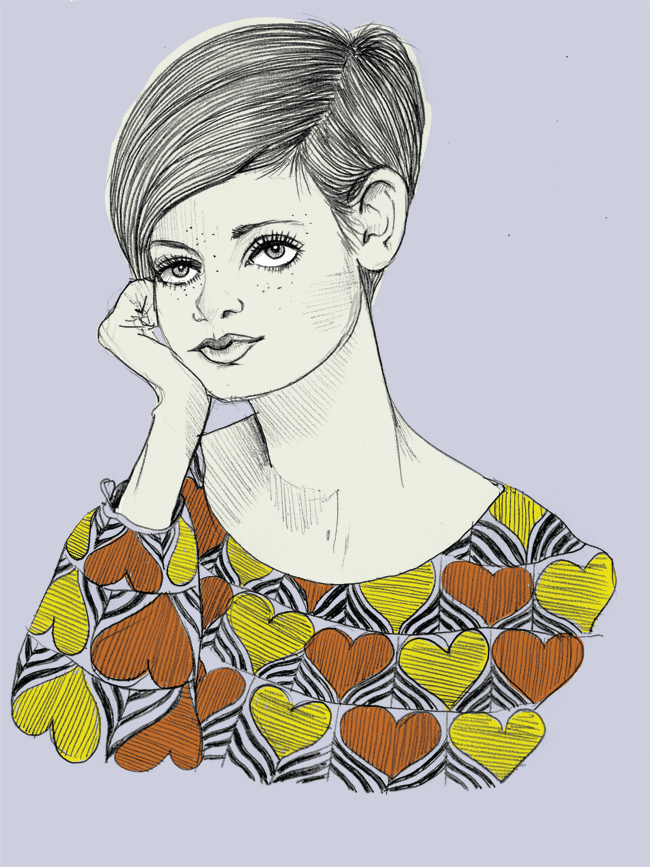 Took a little time on this Friday afternoon to lay some color into a few sketches that didn't make the cut for work stuff. Sometimes, I just need to warm up with some Twiggy, you know? 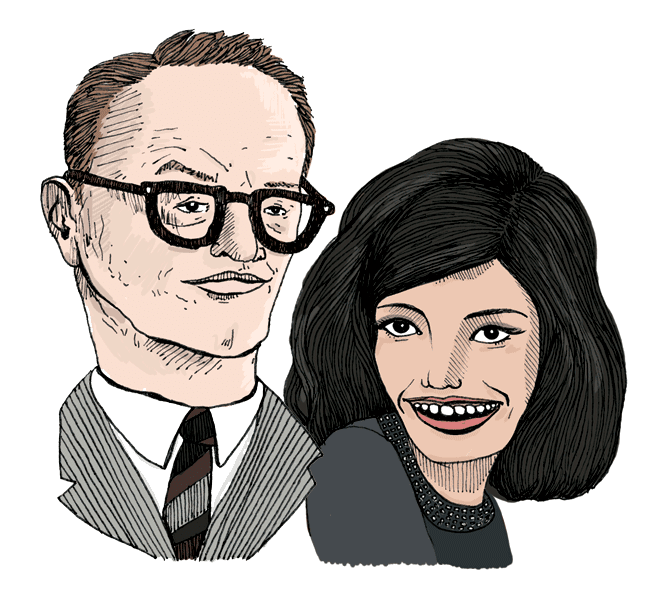 Oh god. Mad Men. I know this pop culture bomb is just detonating all over the internet this week, but really. In a move that possibly qualifies me for crazed-fan status, I decided it was essential to re-watch all four seasons, because really, eighteen months? My memory absorbs a lot of plot lines. Since my television time-management is lacking, I ended up having to marathon over the weekend to pound through the last of Season 4, and was primed for premiere.
It did not disappoint. I was concerned for the splash of this episode - two hours, such a long lag time - but it was understated and informative, dropping us right back in to the ever-evolving lives of Sterling-Cooper-Draper-Pryce. Gossip flew, emotions ran high, Sally ScarJo'd her way through her few lines (and Weiner switched out Bobby again!?) secret baby daddies met their children, and EVERYONE DANCED.
Actually, the dance heard 'round the blogs (if you must) was excruciating - the look on Don's face (not to mention the other guests) was horrific, and Megan's awkward sexiness was kind of itchy. But it was sweet, and the relationship Megan and Don have formed is growing on me slowly (including the ever-extending look we get at the kinks in Don's sex life). I found myself, as I'm sure other viewers did, siding with Peggy. "I don't recognize that man. He's kind...and patient," she says after Don takes the side of the clients for once. The way Don's character drags us around, and the way I'm willing to take it, is impressive.
There are a million little great pieces in this episode, from Harry's sudden switch to an extra sweaty sexpot (also, new glasses) to Joan's turn at motherhood (and being mothered) but my I-may-just-die moment came when my favorite Mad Man, Lane Pryce, imitated Megan's sultry happy birthday. Actually, Roger's was pretty sexy as well. Forget it. This whole episode is better as a series of GIFs.
Enjoy. Can't wait until next week.
Illustration above of Lane and Megan, who have little to do with each other, but, you know, weird facial features. 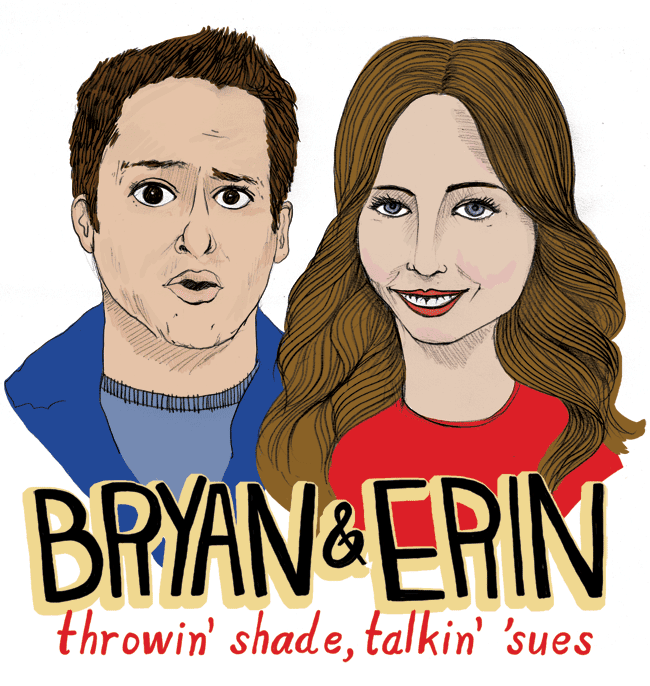 My workdays are filled with podcasts and books on tape - when it's just me here all day, sometimes tunes just don't cut it. And now, thanks to Kelly, I've lost my audio life to Throwing Shade, the salty, fantastically sarcastic podcast by Bryan Safi and Erin Gibson (pictured as seen in my imagination/sketchbook, above). I'm exercising some self control and attempting to ration the last few episodes, but it's basically ear-crack. Listening is like having two smart, foul-mouthed comedian friends bitchily hash out weekly lady/gay issues in the next cubicle over. It's almost enough to make me miss the days of working from an office...actually, that's not true. But still.
Have a listen! They update weekly-ish and will make you pee yourself at least once. 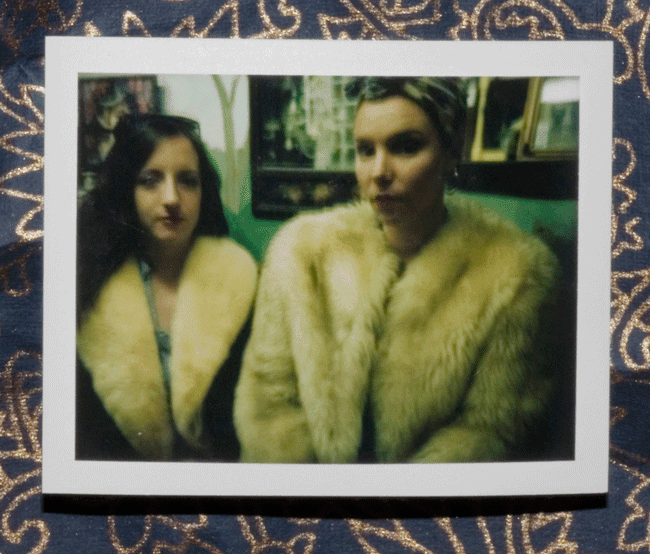 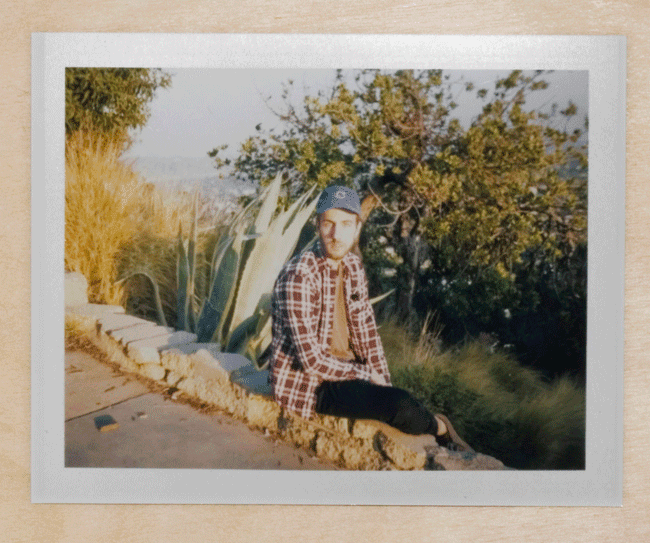 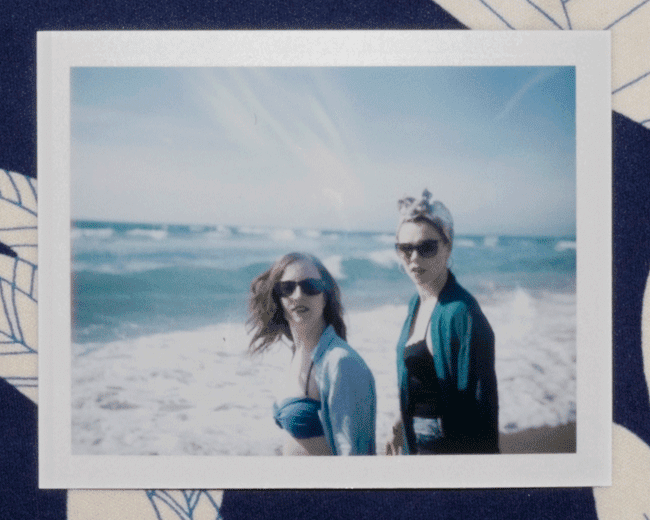 As promised, a few polaroid snaps...all courtesy of Scott, of course. His obsessive side isn't wild about the way this camera performs in low light - the photos are always crapshoot, but I like them anyway. Notice my overtly sexy headpiece, which reigns in pincurls for a full 24 hours. It gives me a nice crazy old broad look, particularly when paired with a seventies fun fur. Someday when I figure out how to make a video, I'll post a full tutorial, complete with headwrap tips and final curl results.
1) thrift shop fun fur chic
2)  taking a break mid-hike
3) oceanside 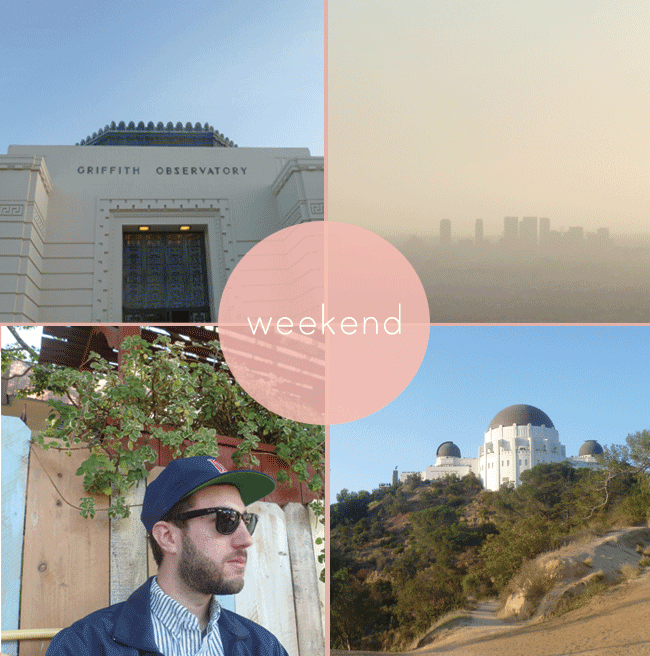 Last weekend Scott's sister visited from Minnesota. We hiked, we ate, we drank, we shopped, we sang karaoke, we beached, naturally. Highlights included a visit to Intelligentsia for a ridiculously priced (but ethically sourced!) cup of coffee, some choice clothing and lipstick finds, and a dolphin siting on the pier at the coast.
Here are a few digital snippets (polaroid shots to come).
Posted by katie wilson at 4:42 PM 0 comments 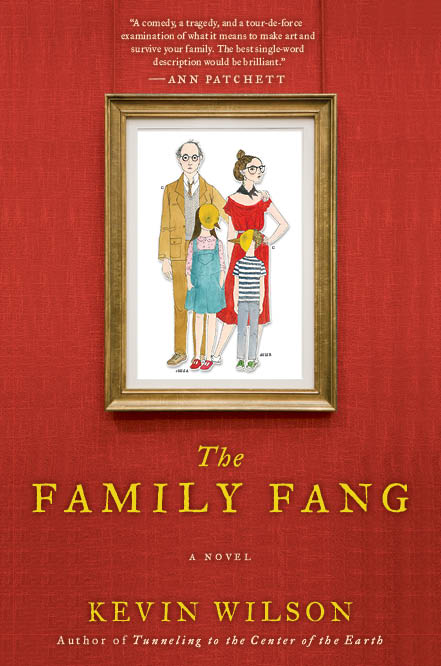 It's been a while since I read a novel as intensely satisfying as The Family Fang, by Kevin Wilson. It's got quite the twee hipster premise, which is why I avoided it as long as I did - Caleb and Camille Fang, performance artists for the art-isn't-art school, involve their children, Annie and Buster, in their works of spontaneous art. This is the sort of book I would have loved to read while at art school - the novel equivalent of Rushmore (mark my words, Jason Schwartzman will co-star in the film version as the adult Buster). But despite the gimmicky idea - gimmicky yet genius - the book gets real very quickly. Kevin Wilson integrates the Fang's crazy performances into the fabric of the novel seamlessly, alternating between chapters in the present day (as Annie and Buster live their lives as actress and freelance writer, and their parents become increasingly removed from the world) and chapters that describe the Fang's various pieces over their relationship. The plot is excellent, and the end surprised me in a completely different way than I expected, but the real wonder is where the author gets all his ideas. Call me unoriginal, but the amount of brainstorming that went into the Fang's artistic greatest hits alone felt like a legitimate body of work. Buster's writing (not to mention the movies that Annie stars in) could have made up their own book of short stories. The critical eye that the Fang parents turn on art and parenting seems somewhat exaggerated, but is achingly realistic and recognizable by anyone who has sat through a wine-induced "serious art" discussion amongst artists. And of course, the effect that the Fang's work and their intense desire to play God in every situation have on Children A & B is fascinating and sad.
Read it before the overly styled movie is made.
Posted by katie wilson at 1:48 PM 0 comments 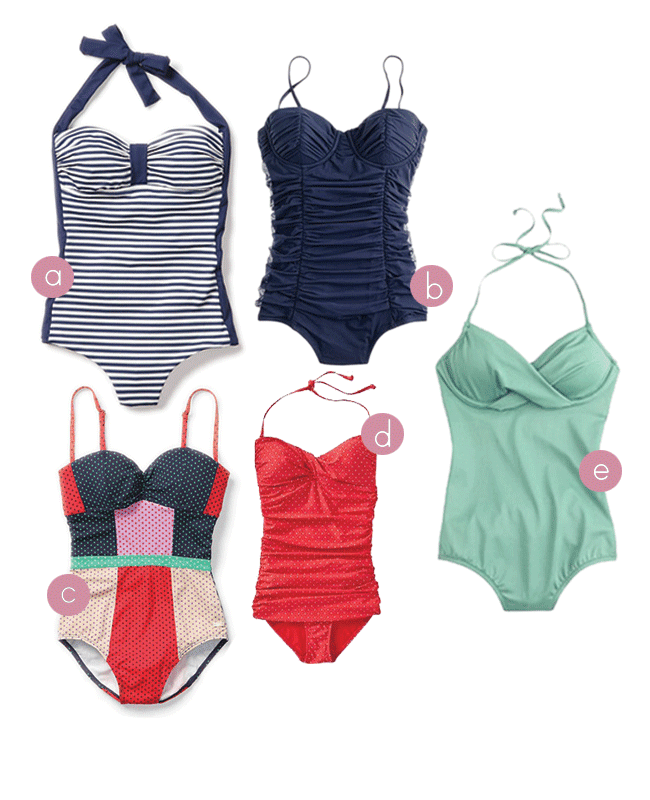 Here's the problem with living in Los Angeles - it adds a whole new dimension to my wardrobe. The swimsuit dimension. That's right - I've become a beach bunny. Last summer S and I ran off to the beach every weekend, and I'm already feeling the fever, though it's barely March and currently about 58 outside. Back in Minnesota (heck, way back in Portland) a swimsuit was a silly expense. I'd lazily dream about dropping cash on a good one every year, then run to Target at the last second for the one time I entered the water. BUT NOW. Oh, but now.
And so, I present to you, dear reader, my current top five. 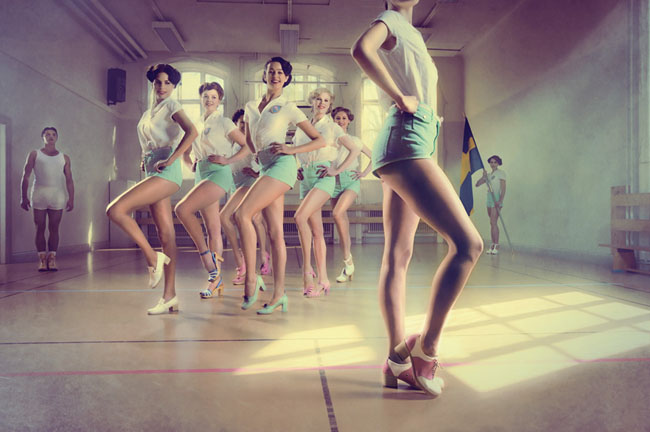 Did you see this? Did everyone on the internets see this? Ugh, it's so perfectly on the mark for the hipster/vintage/pinup set (see also: me, myself and I) and it's just really not helping my Hasbeen obsession. 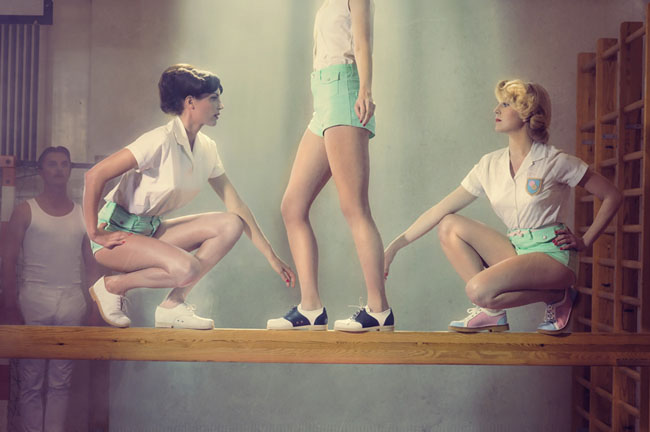 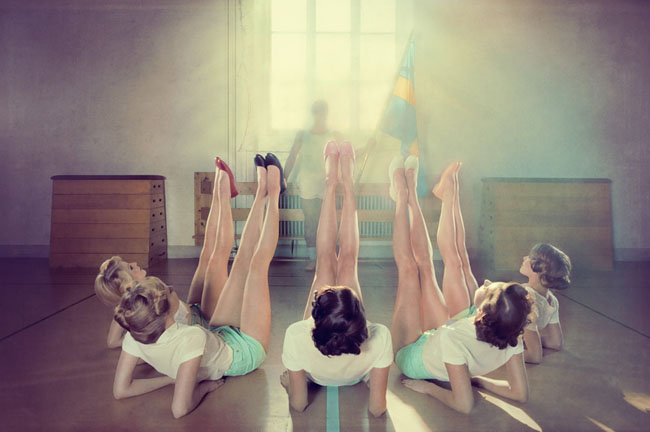 Excuse me while I figure out how to do my hair like this / light my world in this bluish-yellow tinged soft focus.
(All images via Swedish Hasbeens. Found via calivintage)
Posted by katie wilson at 10:07 AM 0 comments